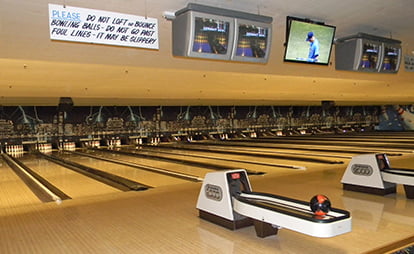 Cataract Bowl is family run and built since 1955. We were started by four brothers; Nap, Joe, Nick and Dominic Biamonte. When we opened in 1955, Cataract Bowl started out with 20 5 pin lanes, which moved to 30 10 pin lanes by 1988. Originally all scoring was done by hand, until 1985 when computer generated scoring was installed. All of our lanes were wood until 1989 when the wooden lanes were replaced by synthetic lanes.

As of Summer 2018 we’re very excited to say that Cataract Bowl is now owned and managed by Chris Biamonte as the sole proprietor and together with his team of experienced family and friends is headed towards a very bright future. Whether it’s public or league bowling we hope you’ll choose us as your number one destination as your state of the art
bowling center.